You are here: Home / Basic-English Grammar / Figures of speech With examples 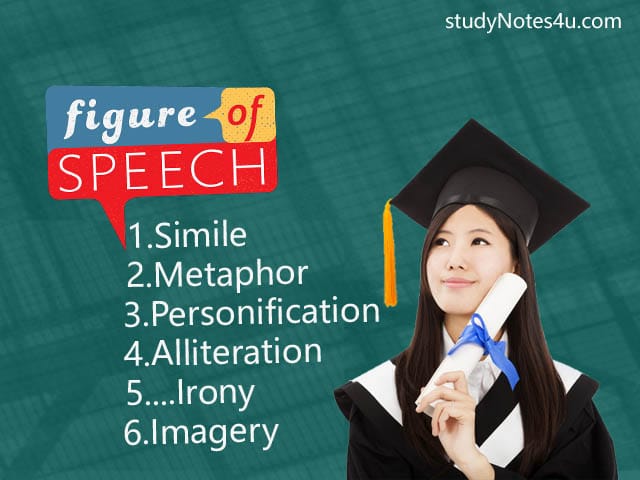 What are Figures of speech

A Word or Phrase used in a non-literal sense so that the speech/writing become more persuasive, vivid and relatable to the reader or the listener. These expressions called Figures Of Speech.

Types of Figures of Speech

A simile is a comparison where you say that one thing is like another thing. The simile is usually introduced by such words: like, as, such, as, just as

A word or phrase for one thing that is used in place of another thing in order to show or suggest that they are similar. In Metaphor ”like” and ”as” is not used

This figure can be called a type of metaphor because, in Personification, we represent an abstract as a person and give it human traits.

Alliteration is derived from Latin’s word. It means ”letters of alphabet”

It is a repetition of the same sound or syllable at the beginning of two or more words.

For Example: When you are deriving a car, you might across a signal: Don’t drink and drive… So, note the successive words start with the sound ”d” that’s Alliteration.

A situation that is strange or funny because things happen in a way that seems to be the opposite of what you expected.

It is a language that produces an image in the mind of people by means of words. Imagery has five types given below

The apparent meaning is totally different than hidden meaning.